Powered by the robot chefs, meals are delivered in as little as 20 seconds

FOSHAN, China, June 24, 2020 /PRNewswire/ -- On June 22, the first robot restaurant complex built by Qianxi Robot Catering Group (Qianxi Group), a subsidiary of Country Garden (HK.02007), opened in Shunde, a city in China's Guangdong province. Powered by the latest in advanced technologies, the restaurant has separate sections for Chinese food, hot pot and fast food and features a wide selection of dishes, each one of which is delivered to the waiting diner within seconds. 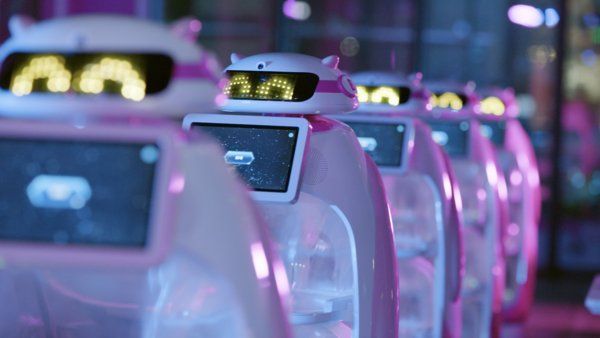 In the 2,000 square meters of modern restaurant space, more than 20 in-house developed robots for different restaurant styles (Chinese cuisine, clay-pot rice, noodle shops) are on hand to assume their assigned role in terms of food preparation and cooking. The dining space, imbued in pink as the background color while replete with the sense of metallic technology, can serve nearly 600 diners at one time. The restaurant's 200 menu items can each be served up in as little as 20 seconds.

Under the epidemic, robot-run restaurants reduce human-to-human contact across the board. This new style of dining is seen to be in line with the current situation and the trend in the future.

"The Qianxi robot restaurant has innovatively achieved both software-hardware integration and man-machine cooperation. It helps to better run a smooth operation through the practical application of robots," said Zhao Chunsheng, mechanical engineering specialist and academician at the Chinese Academy of Sciences. "Qianxi has the most advanced technology with a vast product lineup. It fills the market gap and will have a significant impact on benchmarking in adding value to industry development as well."

Country Garden assistant executive officer and Qianxi Group general manager Qiu Mi explained that Qianxi Group has built a complete industry chain encompassing back-end supply production (the centralized kitchens) and robotic cooking alongside the operation of restaurants and the management of robots. During 2020, the group plans to build more centralized kitchens to further expand in the cities of Guangdong-Hong Kong-Macao Greater Bay Area, while achieving mass production of robots with an expected output of some 5,000 units per year.

China officially released the technical specification for robot safety certification in the food sector on June 22. The technical specification, jointly formulated by the National Robot Testing and Accreditation Center (NRTAC) and Qianxi Group's technology subsidiary Zhiyuan, is the first of its kind in the country. Qianxi Group's lineup of second-generation robots, including some trained to cook clay pot rice and others trained to make mini-ice creams, have taken the lead in receiving China Robot (CR) certifications from the NRTAC.

On the same day as the opening of the restaurant, Qianxi Group also inked a strategic cooperation agreement with Siemens (China) whereby both parties entered into a long-term strategic partnership to boost the digital development of the smart dining segment, including joint development of the industry's first innovative smart dining IoT platform. Bai Liping, vice president of digital industries at Siemens (China), said that the company will join hands with Qianxi Group to accelerate the growth of the segment.

Next     Robot cooks for medical staff fighting virus in Wuhan